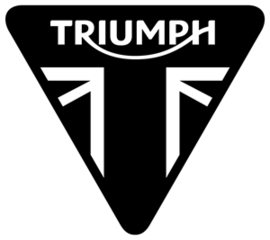 The entry-level model to the Triumph three-cylinder range. 81 horsepower and top-of-the-range finishes and electronics

When a brand like Triumph pulls out a name like Trident, it means that it will be a pretty serious matter. But let's take a step back: even if we have linked the name of the bike to the one of the sea god, the name Trident refers to the three cylinders of the epic bike made by Triumph during the 70s - identical to the BSA Rocket III, which, by the way, is another name that recurs in the Triumph range.

"Slippery Sam", a name earned during the Bol d'Or in 1970 for an oil leak that did not prevent it from finishing fifth during the grueling 24 hours race. And another Triumph Trident 750 won the Production Tourist Trophy five consecutive times. In other words, the name Trident is deeply important to Triumph as, together with the first Japanese bikes, is considered one of the most important bikes of the first era of Superbikes.

The 660, according to Triumph, has the same importance as the older model, even if with completely different ambitions. Even though it’s absolutely not meant for competitions, its mission is extremely important: broaden the audience of Hinckley's customers, by beating its competitors: Japanese mid-displacement naked bikes. The Trident is planning to best them in terms of equipment, finishes and riding pleasure, maybe even in term of price. The Trident will be an easy bike to ride thanks to its low weight.

The design is a mix of English and Italian taste: it was designed in Hinckley but there is the hand of the Italian Rodolfo Frascoli. Some details pay homage to the past, others from the current range, but it’s not intended to be a retro bike. Indeed, it is modern in everything, especially its advanced technology. Its three-cylinder engine derives from the Street Triple S but has been changed in so many details - 67 – so many differences that we could almost say that it’s totally new. It has maximum power of 81 hp at 10,250 rpm and 64 Nm, with a very smooth power delivery. The Trident is also available in a less powerful version, for A2 driver licenses.

Talking about electronics, the 660cc three-cylinder engine has been equipped with ride-by-wire, traction control and two riding modes. There is a nice TFT/LCD display that can be integrated with the My Triumph Connectivity System app that acts as a navigator, data acquisition system, smartphone management and control for the GoPro. There is also an ABS system, which manages a braking system with double 310 mm discs at the front and a single 255 unit at the rear. At the front there’s a Showa41 mm upside-down fork, and an adjustable rear shock at the rear.

There are many accessories for this bike -45- and, most importantly, the service is only required after 16.000 km.

The price? 7,995 euro. It’s not going to be that hard to get one for yourself, actually, not as hard as what Aquaman had to do to take away Atlan's trident - killing a sea monster.